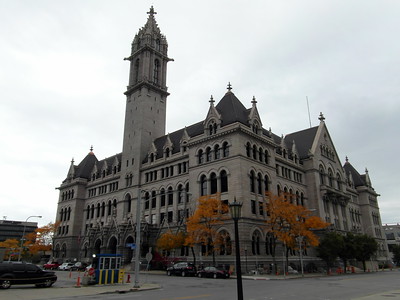 Erie Community College in Buffalo, NY is facing some hard times. ECC is part of the SUNY system, and is millions of dollars in debt. I wrote about ECC and its financial hardship about six months ago.

ECC has three campuses, and it is a struggle to operate all three spaces. ECC’s North Campus in Amherst, NY is the largest of the three campuses. Interestingly, ECC’s South Campus is directly across the street from the Buffalo Bills’ Highmark Stadium. The Bills have already stated that they want to replace Highmark, but they also want to stay in the area. An architectural firm advised ECC to close two of the buildings on its South Campus due to overwhelming neglect. At the time, the firm estimated that closing the two derelict spaces could save ECC about $10M per year. Ironically, ECC’s budget deficit I mentioned earlier is $9M.

He doesn’t acknowledge that the school’s graduation rate meets the national median of 29%. Or that the persistence rate among first year students is 55% and that 3 of 4 students attend ECC full-time. He also didn’t mention that ECC’s graduates earn more than the national average for associate degree earners. Or that they pay 40% less than the average student in a two-year program does. But probably none of that is related to ECC’s “unacceptably low student-to-teacher ratio.

Without many retirements or transfers to other county units, ECC will be forced to lay off personnel by Fall 2022. According to Balkin, nearly 150 ECC employees are eligible to retire. Currently, three of the four unions on campus are working without a contract. The one contract that is still in effect expires in December.

AFSCME Local 1095 represents some of ECC’s employees who are currently working with no contract. The union was hoping to raise the members’ wages by $2 per hour. Right now, many of them don’t make $15 per hour. That puts the workers in a tough spot because many of ECC’s AFSCME employees don’t make enough to clear New York’s $15/hour minimum wage for restaurant workers. Given ECC’s financial position, a $2/hour raise will simply be too large an ask. Instead, Local 1095 will look to transfer some of its members to other county-owned facilities.

Balkin is not without experience in turning community college campuses around. He previously served as the president of Ivy Tech Community College’s South Bend campus. While he was there, he was able to hold enrollment constant during the pandemic.

ECC won’t be able to solve its problems simply by resolving the overstaffing issue. Instead, Balkin says he has a plan to increase enrollment. It includes increasing dual-enrollment students; employer-sponsored degree programs; expanding certification programs; and working with SUNY’s 4-year institutions to see if they can get students who have “stopped out” to return to the classroom.

The Buffalo Bills haven’t forgotten about ECC’s South Campus, either. According to the team, it will not renew its lease on the county-owned Highmark Stadium, which expires in July 2023 unless they have a new stadium deal. The Pegula Sports and Entertainment Group, which owns both the Buffalo Bills and the Buffalo Sabres (NHL), prefers the ECC South Campus site because it will be the least expensive option to acquire a new stadium.

The other possible location for a new stadium in Buffalo would result in the demolition of about 300 homes and increase the stadium’s cost by about a half-billion dollars. PS&E had initially thought Erie County taxpayers might fund the cost of the entire stadium, but that looks increasingly unlikely. PS&E will have to pick up some of the project’s costs, which is why the ECC site looks more attractive.

While the future of ECC’s South Campus hangs in the balance, the ECC administration isn’t waiting to find out what county officials plan to do. President Balkin announced earlier today that ECC would “reorganize” the campus operations and “reduce the footprint of the South Campus.” In addition, it plans to eliminate six occupational programs based on low enrollment. The school will also consolidate 16 other programs, which had been offered at both its North and South Campuses. ECC will now deliver those programs exclusively from its North Campus in either an online or live-streaming format.

While the administration attributes its current financial difficulties to overstaffing, the faculty union and other campus groups are more direct. ECC’s financial problems stem from years of poor management. Unfortunately, the people most likely to lose their jobs are not the ECC administrators who made the bad decisions. Nor are they the Trustees – all political appointees – who mindlessly approved them. They will be the sub-$15 per hour employees and the older faculty and staff, who will be pressured to retire.

There will be no serious consideration given to the size of the administration. Which is ironic because the ECC president made a point of learning the number of faculty members both before and after the enrollment decline. And the number of AFSCME employees on campus, some of whom will need to move along.

Campus executives never seem to be able to hold the line on their own numbers. They never seem to understand that the Law of Diminishing Returns applies especially well to administrators.