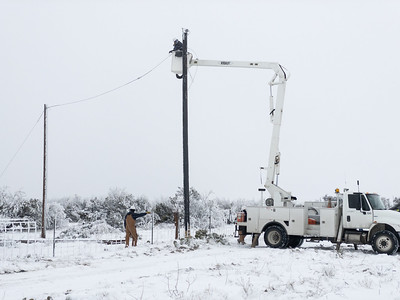 Failure to invest in infrastructure is just plain failure

What happened in Texas this month wasn’t pretty. The large-scale failure of the Texas energy grid caused widespread power outages. At exactly the same time, Texas experienced sustained record-low temperatures that would make even the toughest Michigander wince. This wasn’t a coincidence, of course. The Texas power grid failed precisely because the temperatures dropped so low.

The average daytime high in Texas in February is about 60°F, and the average nighttime low is about 40°F. Texans aren’t prepared for freezing temperatures because Texas doesn’t usually freeze. Without getting too mired in global climate variations, a strong jetstream normally keeps the Artic air in the Arctic and in Canada. High pressure systems bring warm air up from the equator, which counteract cold air masses from the north. But at precisely the time the jetstream weakened, no high-pressure system arrived to push the Arctic air back up north.

Something similar happened to Texas in 2011, but the impact was not as widespread. At the time, Texas energy producers were warned that this could happen again. To counteract the impact of extremely low temperatures on their energy grid, the energy producers were advised to winterize their equipment. Winterizing energy-producing equipment is expensive. So, they didn’t invest in their equipment because the average daytime high in Texas in February is about 60°F, and the average nighttime low is about 40°F. And Texas doesn’t freeze. (Much.) Instead of spending money to winterize the grid, the energy producers showed their “savings” as profits.

Maintain and invest in infrastructure first

The object lesson here is to maintain and invest in infrastructure. Always. Infrastructure investment is a form of insurance. It wasn’t as though the energy producers in Texas didn’t have the money to upgrade their equipment. They were making money hand-over-fist. The required investment was trivial compared to the “profits” they were reaping. And because they failed to invest in infrastructure, the resulting damage to homes, schools and businesses likely measures in billions-of-dollars. And at the worst possible time.

There are parallels to WCC. We have an administration that doesn’t willingly invest in infrastructure on campus. Instead, they would prefer to put off necessary maintenance and upkeep until the last possible moment. Investing in infrastructure means setting money aside, and not spending it on other things.

The taxpayers give money to WCC with the understanding and the expectation that the Board of Trustees and the WCC administration will care for our communal resources appropriately. Bricks falling off buildings, leaking roofs, mold and failed cooling systems in the summer are not just “bad PR.” They are indictments of the way in which the Board of Trustees and the Administration care for our resources. When the Trustees and the so-called “leadership” of the College desperately want to build more buildings, but they refuse to take care of the ones already standing, there’s a problem.

Taxpayers should not settle for Trustees’ lip service on maintenance

In a recent article on the Texas disaster in the broader context of climate change, Jonathan Shieber said,

“The through-line in all of this is a cynicism and abdication of responsibility papered over by the thinnest lips paying the smallest amount of service to solving climate problems.”

He could have been talking about the inaction of the Board of Trustees on solving WCC’s long-term lack of infrastructure investment. Instead of insisting that the buildings be maintained as needed when needed, the Trustees are busy borrowing millions of dollars to build another building to ignore. And they’re borrowing money behind the taxpayers’ backs because they know that the taxpayers would never sign up for the construction of a building that the Administration cannot even coherently articulate a genuine need for.

Trustees, why borrow money to build another building when you do not insist that the Administration invest in infrastructure we’ve already paid for?