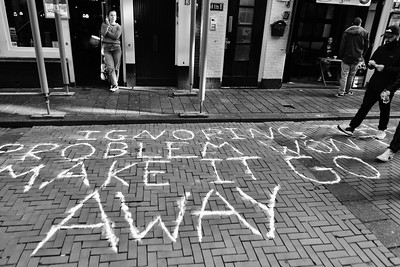 Maximizing the cost of neglect

The Morris Lawrence Building is scheduled to close at the end of December 2020 for a 6-month renovation. The $9 million project will rehabilitate the building and address neglect issues, which hasn’t had a major renovation since it opened its doors. The administration will pay for the entire cost of the renovation using money in WCC’s “general fund reserve.”

Repairing the building is good. Waiting to repair the building until 89% percent of the project cost will go to addressing neglected maintenance is not good. Not good at all. If you look at the WCC Capital Outlay Reports – a document WCC must file with the State of Michigan each year – you can see the building crumbling over time. You can also see – year after year – WCC’s lack of action.

Numerous Capital Outlay Plans have identified a suspected issue with water infiltrating the building’s cladding. Rain and snow are getting trapped behind the brick facing. When you let this condition go on long enough, the bricks fall off the building. That’s exactly what’s happened. And it’s not just the cladding on the building. It’s the leaking skylights, the HVAC systems, the heaving cement outside the east entrance, the mold, the “finishes” – tile, carpeting, walls, etc.

The College will spend $1M to renovate and $8M to rehabilitate the Morris Lawrence Building.

According to WCC, the Morris Lawrence Building which hosts a full schedule of public events – welcomes 150,000 visitors annually. I can’t imagine what goes into the decision to neglect the campus building that the public uses the most. What could possibly have been more important than NOT dumping bricks on the visiting public?

Neglect does not produce savings

He has built the “rainy day fund” by not spending all of the revenue the College collected every year. The College has realized “savings” by doing things like not conducting building maintenance and keeping employee raises below the rate of inflation.

Saving money isn’t a bad idea, but the devil is always in the details. Stiffing the employees is one thing, but as it turns out, you cannot save money by neglecting maintenance. Neglecting maintenance only increases your future costs. The more you delay, the more it costs. It is the EXACT OPPOSITE of saving money.

In other words, the CFO is only now spending the money he’s been “saving” for years to correct problems that he could have prevented. It always costs less to prevent a problem than it costs to fix it once it has occurred. Nearly 90% of the Morris Building’s renovation budget is designated for remediation. And that remediation would have cost much less – millions less – had it only been done earlier.

Paying a premium for waiting

Taxpayers are going to pay multiple millions MORE to repair the accumulated damage to the College’s buildings than we would have paid had WCC just conducted timely maintenance. And now the Administration intends to issue revenue backed bonds to generate money to repair the buildings. We’ve already provided the money to maintain the buildings once. Now, we’re going to provide it again – this time with interest.

What is the point of “saving” money today if willful inaction ends up doubling, tripling or even quadrupling the costs of building repairs tomorrow? How much has this “rainy day” project really saved? And why has the Board of Trustees done nothing to shield Washtenaw County taxpayers from the enormous cost of neglect?