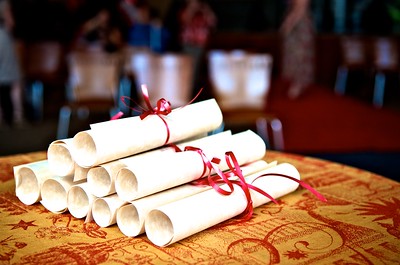 The US Department of Education dropped the reporting requirement for “gainful employment” of graduates in 2019. Using data collected and disclosed from 2013-2018, gainful employment among WCC graduates peaked in 2015-16. In that year, 57% of its graduates reported being employed full-time following graduation. In 2016-17, the full time employment rate dropped to 51%, and in 2017-18, the last year for which data are publicly available, the figure dropped again to 49%.

The “gainful employment” data are a minefield, so prospective students who might be otherwise find themselves persuaded by WCC’s “Employed” gag should tread carefully. Colleges and universities have a notoriously hard time getting alumni to respond to post-graduation surveys. A better way to see what’s happening is to look at WCC’s graduation data, as reported to the State of Michigan.

What do students get from WCC’s Degree Programs?

In 2017-18, the last year for which gainful employment data were reported, WCC issued 3,458 credentials – which by itself sounds fantastic. The problem with this number is that the majority of these “credentials” are certificates that take less than one year to complete. They’re not actual degrees.

If you look at the graduation data, you’ll find that WCC issues more certificates to women and minorities. While this approach inflates the “graduation” numbers nicely, it doesn’t serve the people who are most marginalized in today’s society.

It would be nice if the WCC Trustees prioritized solid educational programming that resulted in more degree-holders and higher wage-earners in Washtenaw County. Instead, the Trustees encourage the Administration to push less marketable, less valuable certificates that game the institution’s graduation metrics, but offer little else.