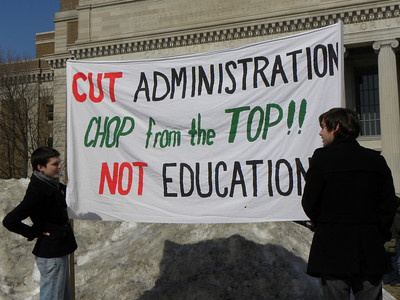 Earlier this week, the Trustees of Muskegon Community College voted unanimously to raise tuition by 4% for the 2020-21 school year. The tuition increase will generate about $225,000 in additional revenue.


“Every year, we have a similar conversation about the balance between tuition increases and students being unwilling to enroll.”

In a bit of good news, MCC noted that it does not intend to raise either the $15 per credit hour infrastructure fee or the $25- per credit hour technology fee. MCC’s most recent annual report shows that its revenues exceeded its expenses by nearly $860,000 in FY 2019.

Based on MCC’s FY2019 revenues of $40M, the tuition increase will raise revenues by one-half of one percent (0.005%). Meanwhile, its Lakeshore Fitness Center has lost millions over the last five years, but MCC remains “committed” to operating that facility.

I don’t know how much a community college can save by laying off part-time employees or nicking students for $5 per credit hour. Or worse, throwing millions away on a “fitness center” that doesn’t break even. If a college were really serious about saving money, it would start laying off full-time administrators.

Earlier this week, MSU president Samuel Stanley announced that the university would freeze tuition for next school year. Additionally, he would be taking a 10% pay cut. Other top executives would be taking cuts between 2%-7% for as much as one full year. Granted, Stanley makes $800,000 per year, so a 10% pay cut isn’t likely to hurt much.

In addition to the executive pay cuts, MSU asked departments to reduce discretionary spending and travel. The president also indicated that construction and remodeling projects could be delayed. While the university has not seen a reduction in enrollment deposits for the fall, it does expect to see fewer international students enrolling as a result of the pandemic.

The WCC administration has reportedly chosen one of these approaches to deal with COVID-19 losses. Guess which one it isn’t…