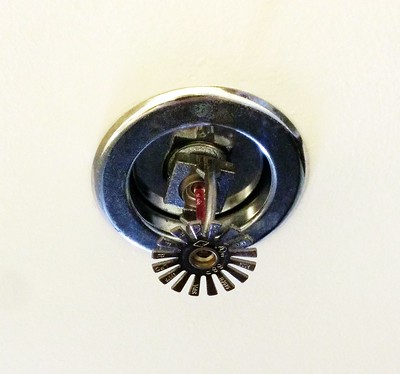 Annually, the College must file a report with the state that includes an assessment of the condition of WCC buildings. Over time the reports chronicle the slow decomposition of the buildings on campus. “Decomposition” might seem a little hyperbolic, but it’s not. It’s the only word that really describes what happens when you do nothing to recover a building in decline.

The administration laughably maintains that it has no money to fix WCC buildings. They have repeated this pap in each of the last six Capital Outlay Reports, which it files with the State of Michigan every year.

“Deferred maintenance, by definition, is projects which have been backlogged due to lack of funding. The impact of delaying these projects will have an immense impact on academic programs. These include roof problems that result in leaks, which can result in environmental concerns such as mold. Continued deterioration will lead to structural damage that will be very costly to repair if delayed. Electrical transformers are living on borrowed time and parts are no longer available; if any of them go, we would have to close that building.”

To say this once is one thing, but to repeat it verbatim six years running is beyond the pale. The statement implies that WCC has no money to fix its neglected facilities. WCC is one of the best-funded community colleges in Michigan. This implication is simply false. Each report features a litany of neglect of the WCC buildings. The College’s lack of action indicates that WCC disregards the impact of neglect on its academic programs.

The WCC administration knows the impact of its policy of neglect

I don’t like to use the term “deferred maintenance” for what amounts to willful neglect. The annual report demonstrates that the College administration knows the condition of its buildings. It documents the exact rate at which a building deteriorates. Over time, these undone projects have piled up, leaving critical systems unmaintained and allowing the deterioration to spread. The reports even predict the five-year cost of doing nothing.

Indisputably, the College administration knows that it is racking up huge repair bills. It’s almost as though the strategy is to let WCC buildings rot to the point of replacement. Replacement always costs more than repair, but since the taxpayers are the ones paying the bills, the WCC administration doesn’t really care.

The state doesn’t pay for deferred maintenance on a building. This is important to remember, because it cuts into the amount of money that community college projects can claim from State Building Authority funding. I’ve written in the past about how this unnecessarily inflates the cost of a project for local taxpayers.

If a $20M project happens to correct $6M of neglect, the State will pay maximum of $7M for the project. The College gets to pay for the neglect plus at least half of the remaining project cost. Instead of paying for just half of a fully conforming project with no neglected maintenance, the local taxpayers now pay for neglect plus half of the remaining costs. Again, the WCC administration doesn’t care because the never-ending generosity of the local taxpayers will underwrite their negligence.

So, which buildings are failing?

According to the most recent Capital Outlay Report for 2020-2024, nine WCC buildings are in poor condition.

Here’s the most recent list of campus buildings, and their FCI scores:

Is it ironic that the Maintenance Building is in the worst condition of all?

Although the report lists OE as being in “good” condition, the standard for “good” is a FCI below 5%. At 5%, OE is more likely in “Fair” condition. Its FCI in the previous report was also 5%, but was listed as “Fair.” In the 2018 report, OE is listed at 5%, and in “Good” condition. More to the point, what’s the likelihood that the building hasn’t deteriorated at all in the last three years?

The bottom line for the taxpayers

For the nine buildings that are in crap condition, the taxpayers are going to foot the repair bills. WCC is launching a $20M rehab of the Student Center, and yes, the poor condition of the building means that most of the cost will come from Washtenaw County taxpayers. The work qualifies for state funding – except for the enormous amount of neglect the building has accumulated.

The Family Education Building is also known as the Children’s Center, where WCC’s daycare facilities are located. This building serves children from 18 months to 5 years of age. From the Neglect Report, it appears as though windows leak, the building isn’t ADA-compliant and is probably a fire trap. From the 2020-2024 Capital Outlay Report:

“Flashing at clearstory windows leaks depending on direction of wind driven rain. Storefront aluminum entrance needs to be modified.”

“Minimal smoke detectors; building is not sprinkled. Fire alarm system was upgraded in 2014. There was an upgrade for exit and emergency lighting. Toilet rooms not ADA compliant.”

The Capital Outlay Report places this building in poor condition, but indicates that it upgraded the FEB fire alarm, remodeled the entrance and added security to the building in 2014. The water heaters failed and were replaced in October.

These issues were all identified in the 2015-2019 WCC Capital Outlay Plan. The indication that six years down the road, the building still has “minimal smoke detectors” is highly problematic. According to the Firefighter Safety Research Institute, in 2019, people have about three minutes to escape a burning building. This is more than a five-fold drop from 1979, when the building was being built. At that time, people had about 17 minutes to leave a structure on fire. The FSRI says that the drop is directly attributable to the heavy use of synthetic materials in carpeting and furniture, lighter-weight construction materials, and open floor plans.

Three minutes is not a lot of time to empty a building, especially when most of the building’s occupants are under the age of 5. If this report is accurate and the building is still not equipped with commercial-grade smoke detectors – the taxpayers should rightly be outraged. If the report of “minimal smoke detectors” is an error, the administration needs to demand more than a copy-paste approach to filing this report. Regardless of whether the information in the latest report is right or wrong, the taxpayers deserve to know unambiguously the condition of the buildings on WCC’s campus.

If the FEB is still deficient in terms of its smoke detectors, correcting this is a much higher priority than fixing the hot tubs at the Health and Fitness Center.

This is why we need an Asset Protection clause. Our youngest community members are, in fact, assets and they deserve to be protected.