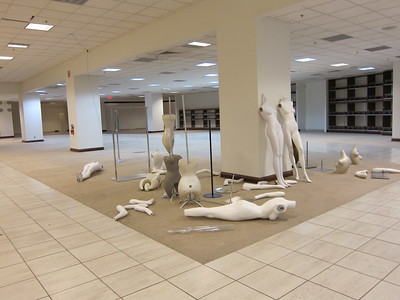 The idea of building a convention center in Ann Arbor is not new; it’s been discussed for years. And the discussions have gone nowhere. You can read an article from 2013 on the prospects for a convention center in the City of Ann Arbor. The story provides good background information, and lays out the political opposition that existed – and may still exist.

If you want more information on the history of a convention center for Ann Arbor, you can also read this item from 2008.

It’s clear from the articles referenced above that the City of Ann Arbor or the county could and probably would make use of a convention center. Given a facility that could hold hundreds (or thousands) of people, University researchers could host professional conferences. The City could also pursue conventions that currently go to other places. The target space identified in the 2008 discussions: 60,000 square feet. That would enable the City to host conferences and events of up to 1,000 people.

The City of Ann Arbor does not have nearly enough hotel rooms available downtown to effectively host conferences. The lack of hotel space downtown also prevents the city (and the University) from hosting large conventions comfortably.

In 2018, the City planned to build a hotel and conference center on top of the “Library Lot.” The voters responded by passing a referendum that prevents the lot from being used as anything except an urban park.

A Convention Center Is Controversial

The idea of a hotel and convention center keeps coming up, but no one in city government, the county or the University has put together a workable plan. The voters tossed a hand grenade in the City’s latest plan to build a convention center downtown. To sum up the situation, the entities that could use a convention facility won’t (or can’t) build one, and the voters won’t pay for one.

The local discussion has been going on (and going nowhere) for 30 years among all the right players. So why does the current WCC administration want to build a hotel and convention center that no one else wants to build or pay for? And why have they not had any discussions with anyone about this plan? The following section is a transcript from the July 30, 2019 Board of Trustees meeting.

55:02: Stephen White (Albert Kahn Associates): But it’s a big leap to become a – you would like someone else to –

55:07 Richard Landau: But there are also probably some issues – I mean I don’t know how the Ann Arbor Convention Bureau Center folks would feel about us operating a hotel. I don’t know if anybody would care, particularly. Um –

Yet another discussion about the construction of a hotel and convention center is too big and too complicated to be conducted in a vacuum. The discussion deserves to be broad, and include all of the interested parties. And a plan should not rely on diverting property tax assessments intended for education to commercial real estate development.

Here’s an idea for an Ann Arbor convention center

Sitting at the corner of State and I-94 are:

Also sitting at the corner of State Street and I-94 is a 170,000-square-foot gaping wound where America used to shop.

170,000 square feet of vacant space literally surrounded on all sides by more than a thousand hotel rooms. Sounds like a good place for a convention center.

The site has infrastructure, space, parking, more than a dozen hotel options, restaurant options, proximity to I-94 (straight shot to Metro Airport), proximity to Eagle Crest for large conventions, proximity to the University of Michigan, proximity to the Ann Arbor Municipal Airport, available space for more construction, established bus routes and a direct connection to the mall. A convention center in that space would help support all of the hotels in the area, the mall and the restaurants. It would repurpose a space that no other single retailer in its right mind would take on today, and it would allow the retailers in Briarwood to thrive. It would also address the city’s desire for a convention center.

And best of all, it does not require the misdirection of the community college’s property tax revenues.

The WCC Board of Trustees cannot be allowed to misappropriate WCC’s generous property tax revenues in a sneaky, misguided end-run around the voters to scratch a long-frustrated itch in this community. Minimally, the WCC administration must immediately have an open and honest discussion with the city, the county, the University and the taxpayers about its plans and motivations for building a convention center on its campus.

Published in Board of Trustees, Millage and WCC Conference Center and Hotel