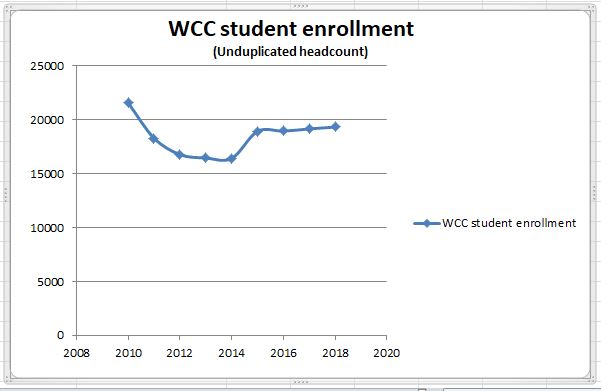 To understand how much revenue WCC has lost from declines in student enrollment in recent years, we first need to look at enrollment figures. WCC constantly reports its student data to the State. This data comes from the Center for Educational Performance and Information (CEPI). There are several ways to look at student enrollment at the College. Two of the most common measures are the Fall enrollment and the Unduplicated Headcount.

The data show that there was a drop in student enrollment from 2010-2014. Beginning 2015, WCC’s unduplicated headcount rose and has stayed relatively steady through 2018, the full last year for which data are currently available through CEPI.

WCC hasn’t lost money on declining enrollment. WCC has definitely lost enrollment in the last 10 years. Its enrollment is now approximately what it was before the Great Recession. To be sure, the College’s enrollment always varies from year to year, but WCC’s FY2020 budget is the largest it has ever been. Further, population predictions made by the Southeast Michigan Council of Governments (SEMCOG) show that the school-age population in Washtenaw County will increase by 10% in the coming decades.

But the school-age population is only part of WCC’s enrollment picture. According to the State’s CEPI data, 38.5% of WCC’s students are adults over the age of 25. That’s nearly 4 out of every 10 WCC students. A drop in the school age population would not necessarily translate into a drop in enrollment at WCC. And it should not be the foundation upon which excruciatingly bad decisions about WCC’s future get made.

The WCC administration should use this time wisely. Rather than throwing good money after bad, WCC should focus on addressing the educational needs of working-age adults and create programs to attract and accommodate Washtenaw County’s growing young-adult population.

Published in Millage and WCC Budget