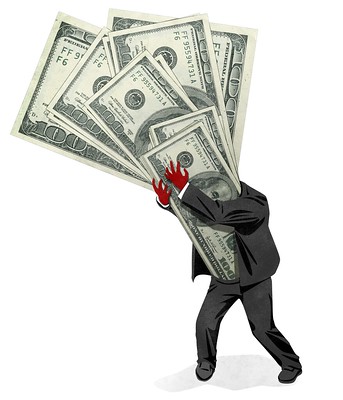 WCC gets more local tax money than all but two community colleges – Oakland CC and Wayne County CC. For all the support we provide, the WCC Board gives us very little in return.

The value of a Washtenaw Community College millage

The WCC Board Manual emphasizes executive support over authentic governance. It does not delineate a clear line of authority from the Board to the College President. The WCC Board sees itself as a mere formality that exists to satisfy state law.

The Trustees have not seen fit to adopt an asset protection policy. Such a policy would make taking care of the College’s “assets” – tangible and intangible – a condition of the President’s employment. So, when mold grows in the Morris Lawrence Building, the Board – in theory – would hold the College President accountable. When a chiller fails during UA week, the President would have some questions to answer. And when bricks fall off buildings – creating liability for WCC – heads would roll.

Other community colleges have that. We do not. What the taxpayers have given WCC is an over-sized pot of money with no real executive accountability. The results are predictable.

This frees the College administration to ignore building maintenance until the facilities pose injury risks. Certain campus buildings (like the facilities maintenance building) have reached the failure point. It is now less expensive to rebuild it than fix it. This lack of critical Board oversight costs the taxpayers millions of dollars. Maintenance is always less expensive than neglect. But our Board of Trustees refuses to protect the taxpayers’ interests. That’s the value we get from a Washtenaw Community College millage.

More buck for the bang

Worse than having to replace buildings, we also have to borrow money to do it, which further inflates the cost. 50%-70% of WCC’s construction costs planned through FY2023 arise from neglect. And the College has as much as $32M of capital projects planned. We the taxpayers will pay more to resolve existing neglect issues than we’ll spend to get new buildings.

Not that the new buildings are needed – they’re not.

But if the administration had addressed building neglect earlier, WCC would have more money to spend on things the voters value.

When the Board of Trustees allows the Administration to build unnecessary buildings it creates future problems.

Mostly for the taxpayers.

The Health and Fitness Center requires unrelenting, expensive maintenance. Anecdotally, I have heard from HFC subscribers about the building’s inside condition. Never having been inside, I personally cannot say what conditions are like in the HFC. I can say that it disturbs me to receive direct-mail advertising for the HFC. Unlike others who undoubtedly received the same flyer, I know that the building is already oversubscribed by nearly 1,500 people. The wear-and-tear generated by oversubscription alone must be enormous.

The Board of Trustees approved this. They apparently gave no thought to how much it would cost the taxpayers to support a high-maintenance building. And maintenance is not WCC’s strong point. With the additional subscribers, the building is now failing faster than planned. The College needs the additional subscribers to subsidize the building’s $1M annual debt payments, and the non-stop major maintenance. And the taxpayers are paying for the rest.

The taxpayers never agreed to this. But the WCC Board of Trustees did. They created an unnecessary operational expense and now we’re stuck with it.

That’s the return on investing in a Washtenaw Community College millage.

Vote on the Washtenaw Community College millage on March 10, 2020

Maybe I’m in the minority, but I don’t like being saddled with bills for buildings I wasn’t asked about. The WCC Board of Trustees is literally afraid to put these projects in front of the voters. If anything, the voters would inject some sanity into the process. With the exception of the maintenance facility – the real purpose of new campus construction is to decorate some executive’s résumé.

For me, the question about the Washtenaw Community College millage isn’t about money. It’s about how much control the voters want over their WCC taxes. We’ve already been eliminated from construction questions because it’s easier to go around us. The Board prefers to borrow money from private lenders at higher interest rates and stick the students with the bill over asking the voters for help. The worst thing that could happen is that we say no.

What are they afraid of?

The taxpayers’ only function right now is to pay the bills – whatever bills the Trustees come up with. That might be OK if the Board exercised tight control over the administration – but they don’t. They exercise virtually NO CONTROL over the executives. And no one on the 2nd Floor of the SC Building is focused on credit-based education. They want training instead of education, and hotel rooms instead of classrooms.

What will we be renewing with this Washtenaw Community College millage? No accountability, no integrity and no education.

Which is exactly what we’re getting right now.

Published in Board of Trustees, Deferred Maintenance, Health and Fitness Center, Millage and News