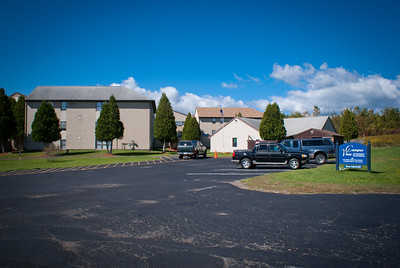 FMCC dormitories are back on the market

Earlier this year, I wrote about Fulton-Montgomery Community College’s dormitories, and the trouble they’ve brought to the institution. FMCC is located in Johnstown, NY. New York state law does not permit community colleges to own dormitories directly. Instead, FMCC’s foundation, the Fulmont College Association (FCA), holds the titles to the FMCC dormitories.

In 2010, FMCC came up with a grand plan to make some money. The plan was to acquire, then rent out dorm rooms to non-resident and international students. These students paid twice the tuition that local residents did, and they were practically guaranteed to need housing.

FCA borrowed $11.3M from the US Department of Agriculture to buy two existing dorms from a private company and build a third residence hall on campus. The new dorm would double the college’s residential space from 144 beds to 288. So far, so good. The dorm strategy cost FCA about $775,000 per year in debt service on the loans.

At the time the third dorm was built, FCA had a waiting list of about 50 students for space in its two existing dorms. At one point, FMCC contracted with a local hotel to house the overflow residents. But by the time the third dorm opened, enrollment began to decline, so it never quite filled. The new dorms didn’t increase enrollment the way FCA predicted it would. The result was that the FMCC dormitories never covered their own bills.

To give you an idea of how the revenue picture played out, the FMCC dormitories generated $2.3M in 2015-16. Three years later, the facilities were generating $1.3M. According to FCA’s tax returns, the dorm operations lost money every school year beginning in 2014-15. The losses ranged from $71,000 to $760,000 by the time the pandemic shut the dorm operations down. In addition, the Trump Administration’s restrictions on international student visas reduced the number of international students at FMCC by 75%. That produced significant financial losses for both FMCC and FCA.

Last summer, the FCA finally threw in the towel, and informed the USDA that it was in imminent danger of defaulting on its loan. It proposed to sell the FMCC dormitories for 61% of their market value to a developer in a sweetheart deal. The sale was to be brokered by a former FMCC board chair. That didn’t fly. Other prospective buyers contested the sale, as did a local attorney acting on behalf of a FMCC student. The USDA sent a US Attorney to Johnstown, and the New York State Attorney General also paid FMCC a visit.

Everything’s been smoothed out, and the USDA has once again given its blessing to sell the FMCC dormitories. This time, the asking price is $1.8M, the appraised value of the properties. The USDA will collect the proceeds from the sale, in lieu of foreclosure.

The lessons here are three-fold. First, the deal was risky. The FMCC administration was blind to this risk due almost entirely to the dollar signs in their eyes. Second, because New York state law does not permit FMCC to own its student housing directly, FMCC could not go to the voters to ask tax-backed bonds. Instead, it had to rely on the dorms to pay for themselves.

Which they didn’t do.

Enrollment dropped in the aftermath of the Great Recession. The resulting extra-long growth cycle kept students away from community colleges. The Trump Administration killed the student visas for most of FMCC’s international students. And then the pandemic hit.

You can chalk that up to bad luck, or bad timing or both. And this is the third lesson. The decision-makers made lousy financial decisions. They saw only what they wanted to see and ignored the rest.

Ultimately, the blame lies in FCA’s chronic inability to properly assess the risks they were taking. They misinterpreted recession-driven enrollment growth as a permanent condition. FCA borrowed heavily to both buy and build what they assumed would be income-producing properties. Instead, they got debt-producing properties. They never considered that their miniature housing bubble could pop.

It’s very easy to gamble with the public’s money. In this case, the damage wasn’t limited to Johnstown, NY. Every taxpayer in the US lost money on the FMCC dorms. That’s why, in this state, community college trustees should always mitigate the risk of borrowing with tax-backed bonds.

Trustees, don’t get dollar signs in your eyes. And don’t build (or buy) what the taxpayers don’t explicitly agree to fund. Why? Because you’re not that good at assessing risk.