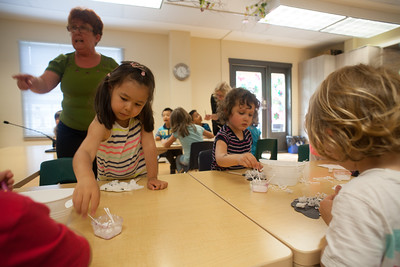 Today, Wells Fargo economist Sarah House, the report’s author, estimates that half a million families have no reliable childcare. Bureau of Labor Statistics data show that one out of eight pre-pandemic daycare workers is no longer employed in the sector. Overall, employment is about 98% of what it was prior to the pandemic.

The job losses aren’t coming from diminished demand for service. As inflation ratchets up, it becomes more difficult for daycare providers to subsist on an average annual salary of $25,500. And the low pay of childcare work isn’t the result of its low cost to families. A family pays, on average, $11,000 per year per child for full-time daycare.

One one end of the equation, childcare workers don’t get paid enough to remain in the sector. On the other end, daycare services are too expensive for many families to afford. The results are predictable.

Women with pre-schoolers participate in the labor force at a remarkably lower rate than men with pre-schoolers. 28% less, according to BLS figures. The current daycare system in the US hurts women in more ways than one. 24 out of 25 daycare workers are women. At $12.25/hour on average, childcare is one of the lowest-paid occupations today.

A recent study by the University of California Berkeley found that childcare salaries are so low that about one-third of childcare workers there rely on at least one form of government assistance to make ends meet each month.

While federal spending on childcare has risen in the last three years, daycare is largely a private sector industry. Larger providers who cannot find staff must scale back their operations or close, precisely when demand is at a peak. Women who want to return to the workforce cannot because they cannot find (or afford) reliable daycare services. Workers cannot subsist on the sector’s near-poverty wages or bear the risk of working with a largely unvaccinated population.

House, the economist who wrote the Wells Fargo report, suggests that daycare should become part of the public education system. With that would come the taxpayer funding needed to raise worker pay, stabilize service availability, and get parents working again. If economic growth among a shrinking workforce is the goal, it’s important to eliminate barriers to employment.

The overwhelming truth is that the Washtenaw Community College administration closed the Children’s Center at exactly the wrong time. From a public policy standpoint, shuttering the on-campus daycare in service of a tone-deaf master plan was ridiculous. Authentic oversight by the Board of Trustees could have prevented this. Apparently, our community college no longer works for (or answers to) the community. So, the question becomes, who is WCC working for?