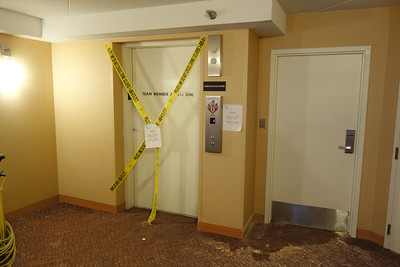 Which Future Awaits The WCC Hotel?

As part of WCC’s new master plan, the College administration plans to build a hotel and conference center on the campus. Since the Trustees will put the taxpayers on the hook for it, the taxpayers deserve to know how much a hotel costs.

Right now, WCC has two possible futures ahead of it. (Let’s call them Future 1 and Future 2.) Common to each future is WCC’s need to address a potential decline in enrollment, which will decrease tuition revenues. Future 1 and Future 2 lay out different options for addressing the loss in revenue.

WCC already has some (bad) experience with creating alternate revenue streams. The Health and Fitness Center, first opened in 2007, was designed to be self-supporting. After a mere 12 years of operation, the HFC still hasn’t managed to pay for itself, and is awash in both debt and high maintenance costs. But I digress.

Let’s go back to the Futures…

How much does Future 1 cost? The answer, of course, depends upon what kind of hotel you want. According to HVS, a global hotel valuation firm, most hotels in the area surrounding Detroit are classified as limited-service hotels.

For the sake of argument, we’ll assume that WCC’s hotel will be a limited service hotel. Limited service hotels comprise about 50% of new hotel construction, so it’s a good bet. Besides, the other possible options are a lot more expensive, and I’m trying to give this hideous plan the benefit of the doubt.

To build a limited service hotel, the taxpayers can expect to spend somewhere in the neighborhood of $140,000-$150,000 per room. A 100-room hotel would set the taxpayers back $15M. Current occupancy rates are about 65%-70% in the Ann Arbor area, and current average room rates are about $120-ish per night.

So, on most nights, our 100-room hotel is effectively a 65-70-room hotel. Future 1 Inn and Suites might generate $2.85M-$3M in gross annual revenues. That sounds good, but the net profit on a hotel these days is about 5%. Let’s assume that the operator’s profit and the building maintenance is included in the operating expenses. In a good year, WCC gets to keep the full 5% – $142,350-$150,000. The figure doesn’t include the bond debt the taxpayers will take on to build the hotel, but let’s set that aside for right now.

The problem with Future 1

If this revenue generation plan is supposed to save WCC from the Baby Bust, there’s already a problem. The 5% net profit figure is good. Really good. Perhaps too good. In some years, net profits for hotels are negative. Washtenaw County taxpayers – not the hotel operator – will be absorbing the negative profits in those not-so-good years. Because this is Oz, we’re going to assume that every year in Future 1 will be A Really Good Year.

There’s no hard-and-fast rule about hotel remodeling, but even in Future 1, hotels need to be remodeled periodically. Let’s say that we’ll do this every 10 years. If we set our profit aside every year (and we always have Really Good Years), we’ll have $1.5M to spend on our hotel refresh.

Sadly, each room could cost as much as $25,000 to refresh – or $2.5M for all 100 rooms. That doesn’t include the corridors, the lobby, public restrooms, fitness rooms, pools, guest laundry facilities, meeting rooms, elevators, non-guest service areas, the parking lots, signage, etc. A major remodeling would also require the hotel to meet any new health, fire and safety standards that may have been introduced since initial construction. Combined, these could add millions to the total renovation costs.

The $1.5M that we dutifully set aside each year will not come close to covering the cost of the decennial renovation. Which will not be optional, since guests don’t want to stay at the Hotel That Time Forgot. (This is Future 1, not “Somewhere in Time.”)

Even in the best possible circumstances, the Future 1 Inn and Suites will never generate revenue for WCC. Future 1 still leaves us with a hole in the WCC budget and a catastrophically expensive side business that drains revenue from the College’s budget.

The math in Future 2 is agonizingly simple. It goes something like this:

It’s a lot less expensive and easier to recruit an extra 50 students for two semesters than it is to build a $15M hotel, pay the bond debt for 20 years, remodel the building every 10 years, hope for consistently high occupancy throughout each year and pray that the hordes of visiting conventioneers don’t trash the hotel.

Can it really be that simple?

If, under the best of circumstances, the hotel can only clear $150,000 per year, recruiting more students is the better way to go. Future 2 offers minimal overhead costs with the same or better impact on the General Fund.

In Future 2, WCC increases its high school dual enrollments by working with Ann Arbor Public Schools, or by appealing directly to parents and families in Washtenaw County.

The University of Michigan does not offer any remedial courses, but that can prevent some of their students from pursuing STEM-based careers. In Future 2, WCC works closely with Big Brother to develop foundational math courses that prepare university students to succeed in UM’s math courses.

Future 1 is a highly risky, expensive proposition that siphons money away from WCC’s mission and burdens the taxpayers. Future 2 allows WCC to improve its bottom line while sticking to what it does best.

It’s not hard to see which future the taxpayers should demand for WCC.