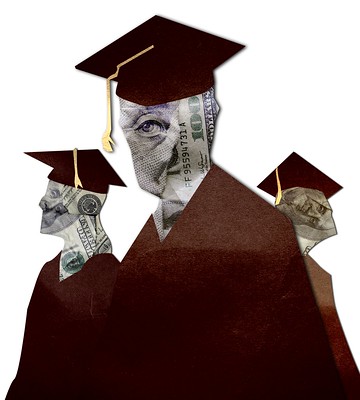 Earlier this month, the Center for Educational Performance and Information (CEPI) released student success data for Michigan’s community colleges. The WCC administration has reported this data to the state for years.The State data consider each school’s graduation rate by the length of time the student needed to complete a credential. A full-time student should be able to complete a two-year degree program in two years. A part-time student, however, may take several years to complete the same program.

The CEPI data show not only how long it took students to complete programs from the time they first enrolled, but also provide demographic details on students who graduate. According to the CEPI data, nearly 7 out of 10 black males who enroll in degree programs at WCC do not graduate.

WCC President Rose Bellanca has made no secret of the fact that she admires the way Macomb Community College and Schoolcraft College generate “other revenue.” She claims that these schools generate sufficient “other revenue” that they don’t need to worry about declines in their enrollment.

Rose Bellanca, from the November 19, 2019 WCC Board of Trustees meeting:

RB: – “In order to do that, we have to look at some other revenue options. And the – the comm – the colleges – the community colleges that are – there are two in particular that are extremely well positioned now, regardless of their enrollment, and that’s Schoolcraft College, as I know Dianna knows from our – from MCCA, where that – sorry that president through the years has invested in mixed-use opportunities for his college, so he has revenue coming in.

RB: – The other is Macomb Community College, and that president, the one I worked with, um, had – I mean – we own everything around – on Garfield. And all of that mixed use, you know, land brings in revenue to the College. And so, they don’t really have to worry too much about their enrollment, because they have other ways to bring in revenue to support their college.”

Other revenue isn’t as important as student success

Since Dr. Bellanca has chosen Macomb Community College and Schoolcraft College as her models, let’s take a look at them. I’m not particularly interested in how well they generate revenue, since generating revenue is not a mission item. Instead, let’s look at their six-year student success rates. The table below shows the percentage of students who graduated after starting a degree program a given year.

So, the six-year graduation rates for the schools that “don’t need to worry too much about their enrollment” are both lower than WCC’s. If that’s the case, why consider modeling anything after these schools? Generating “other revenue” doesn’t translate into a higher student success rate, so why focus on it?

The overall graduation rate doesn’t tell the whole story. When you look at the graduation data demographically, another picture emerges.

WCC administration should be mission-centric

WCC does a better job of graduating minority students (and students overall) than either of Dr. Bellanca’s “model” schools. Graduating students – not making money – is the purpose of a community college.

It’s telling that the President gushes over these schools based on their unrelated revenue rather than their student success. Her “model’ schools focus on “other revenue” precisely because fewer of their students complete degree programs. Their students generate less tuition revenue because they don’t remain enrolled. That isn’t something to model WCC after.

And the WCC Board of Trustees sleeps on.