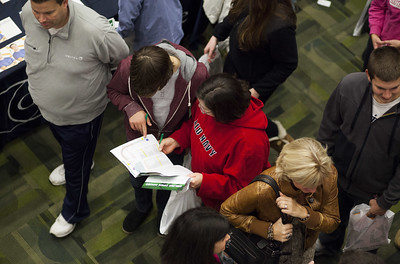 A complete economic cycle begins with a period of growth. This period (also called a “boom” economy) concludes when it reaches the point known as peak expansion. The following decline –called recession – continues until it reaches its lowest point – known as the trough. Following a trough is a period of recovery, which eventually leads to expansion, and the economic cycle begins again.

Since 1945, complete economic cycles have averaged 58 months – slightly less than five years. The current economic cycle began in March 2009. If you’re counting, that’s 131 months or 2.25 times longer than average. Community colleges have been waiting a long time for economic relief.

Economic cycles aren’t easily predictable. There are no reliable leading indicators of a recession. During recession, nobody knows how deep the trough is, or how much time the economy will spend there. Likewise, no one knows how well the economy will recover, or how much it will grow. That’s why it is essential for community colleges to spend conservatively during periods of economic growth. They don’t know how long their enrollments will be low.

Community colleges compete with the economy

Community colleges don’t compete with other community colleges or 4-year universities for students. They compete with the economy. When the economy is good, it’s very hard to persuade people to stay out of it, even for two years. When the economy is bad, many people can’t participate. It’s especially hard for teenage workers and young adults to find work. Going (or going back) to school is the best way to make productive use of economic down time.

Over time, a drop in the school-age population means that community colleges will have to compete even harder for students. In smaller numbers, college age individuals are more likely to find work without a post-secondary degree – even during a soft economy.

So, how have the local community colleges been coping with declining enrollments?

Nonetheless, to cut costs, OCC has restructured its administration, and is working to manage its utility costs. It has planned to increase tuition by 3% per year through 2024. OCC has also eliminated vacant positions and increased its reliance on temporary and part-time workers to keep its expenses low. The College has some capital projects planned and intends to maximize the State of Michigan’s 50% match on them. To improve enrollment, OCC intends to focus on student retention. The College also has an endowment of about $17.5M, which returns investment proceeds to the General Fund.

Wayne County Community College is one of the largest community colleges in the State. It maintains several satellite campuses, but it is not immune to enrollment declines. To cope with its $40M+ loss of funding, WCCCD has reduced staff by leaving many positions unfilled. These are not unnecessary positions, and WCCCD admits that the staff shortages impact their ability to deliver services throughout the Metro Detroit area. To encourage enrollment, WCCCD has decreased tuition and offered “tuition amnesty” for students who owed WCCCD money for previous enrollment.

Henry Ford College has also lost enrollment since the end of the Great Recession. HFC has coped with declining enrollment by carefully planning class schedules, and at one point pledged to avoid canceling classes for low enrollment. HFC recently won a millage increase from its voters. Academically, HFC has focused on improving dual-enrollment numbers from local high school students and early college programs. In addition, HFC is considering the four-year degree options that are available to community colleges in Michigan. They have also examined tailored pricing for programs and try to maximize federal funding. HFC is pursuing a new advertising strategy to target special populations. They admit they’ve had mixed results with their retention efforts.

All of these institutions have experienced steeper, sharper declines in their enrollment. None of them have suggested that they need to build a hotel to generate revenue. Instead, they’ve done what a reasonable person might expect. They reduce costs, maximize state funds, encourage enrollment through partnerships with local high schools, and ask for additional taxpayer support. They’ve reduced their administrative staffs, eliminated open positions and carefully managed debts.

When you compare WCC to its regional counterparts, it’s easy how other schools are managing declining enrollment, and making the most of the revenue they receive from other sources.