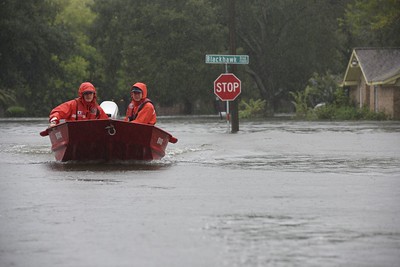 Houston is literally a disaster waiting to happen. In the past six years, the city has dealt with multiple floods and hurricanes. It also had power grid failure that left Houstonians (and much of Texas) without heat as temperatures plunged below zero. As the city cleaned up after Hurricane Harvey, Houston’s mayor, Sylvester Turner, decided that Houston would become a resilient city. Disaster training is a big part of that plan.

The term “resilient city” isn’t just political chatter. It involves taking constructive steps to mitigate, avoid and deal with the impact of climate change. HCC’s Resiliency Operations Center will include a 39-foot swift-water rescue training course that will cut through campus. In addition, HCC will build a 15-foot, deep-dive tank, and a 100-foot simulated “rocky gorge” that includes both above-water and below-water obstacles. The course will also include submerged or flooded “buildings.” The idea is to train first responders and others in an environment that’s both incredibly challenging and realistic.

According to Chancellor Cesar Maldonado, the idea is to provide the disaster training that Houstonians will need to cope with the city’s changing environment. The disaster training facility will help people understand how to deal with flooded street, submerged vehicles and other similar obstacles, mass evacuations, downed power lines and disabled infrastructure.

HCC doesn’t plan to limit access to the disaster training course to Houston’s first responders. Mayor Turner wants at least 500,000 Houstonians trained and certified in managing rapidly developing disasters. Houston currently has a population of 2.3M people, so Turner wants more than 20% of the city’s population to go through the course at HCC.

Resiliency requires disaster training for everyone

Turner wants ordinary residents trained to manage disasters because that’s who’s most likely to be available when a disaster strikes. Having 1 out of every 5 residents correctly trained to manage crises will help reduce injuries during a crisis. Also, it will increase awareness of crisis management and make crisis response easier for Houston’s firefighters, paramedics, police, utility workers and residents.

HCC’s resiliency training course is a major step toward being able to reach that goal, but constructing the course will not be cheap. The Texas State Legislature has allocated $5M to the project. Private donors have raised an additional $10M. That leaves another $15M yet to be raised. HCC believes it can get some federal funding for the project as well.

This is a prime example of a community college that returns value to its community. HCC is playing an active role in the city’s disaster preparedness process. Houston’s disasters in the past decade have demonstrated the city’s need for a comprehensive, coordinated approach to training its first responders, businesses, and residents in the best way to respond to adversity.

(As a point of comparison, Washtenaw Community College administrators would like to build a hotel on campus.)