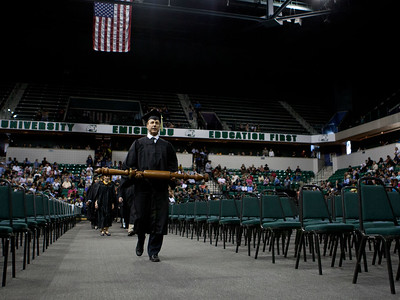 Escape from recession begins at the community college

There’s really nothing to recommend a recession, but if you’re going to have one, it helps to be prepared. Washtenaw County is actually quite prepared for recessions, thanks in large measure to WCC. Washtenaw Community College is the “go-to” place for people looking to train or re-train for a job. It also provides a low-cost entry route to higher education.

A recent study released by the National Student Clearinghouse Research Center showed a surprising impact of community colleges during recessions. It’s tempting to think that students choose community colleges instead of four year institutions. Enrollment data from the most recent recession don’t support that. Instead, the data showed enrollment increases at both two-year and four-year institutions during the recession.

High school graduates choose to go to college instead of entering the workforce directly. Additionally, the study showed that community college enrollment during the recession drove subsequent transfer enrollments in four-year institutions.

Many colleges focus on the concept of retention – that is, retaining students until they graduate from that institution. This study focused on “persistence” – where a student continues post-secondary education at some institution, regardless of where the student started. The study authors found that community colleges contributed significantly to educational persistence, even if many of their students didn’t complete a two-year degree before moving on. For many students, community colleges provide a much needed place to start during an economic downturn. In fact, they can kick-start economic recovery.

WCC must remain focused on its educational mission

WCC’s current administration wants to take taxpayers’ dollars and use them to build a hotel and conference center. The administration claims this will generate additional revenue for WCC. Nothing is further from the truth. This will simply damage WCC’s ability to perform during a recession by saddling it with the enormous bills for an empty hotel and an unused conference center.

During a recession, WCC will have to divert property tax and tuition revenues to the hotel and conference center to keep it solvent. The state will not pay to build or support this asinine venture. We will be paying for this foolishness by ourselves, during a recession, when we can least afford it.

Voting on WCC’s upcoming millage renewal request is the best way to say how we do (and don’t) want our education tax dollars spent. Our community college taxes should support the community college – not the careless and wasteful spending of its misguided administration.

Published in Millage, News and WCC Conference Center and Hotel