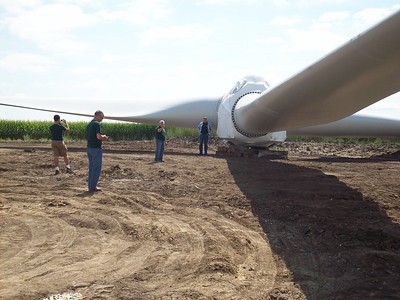 I recently drove to Pennsylvania, the fourth-largest coal-producer in the United States behind Wyoming, West Virginia and Kentucky. Coal industry employment peaked in the US in 1923, at around 860,000. Today, the industry employs only about 50,000 people, thanks mostly to improvements in mining technology. Even though coal production has increased, seven of the top ten US coal companies have declared bankruptcy since 2016. To be honest, I didn’t see any coal mines on my trip, but I did see solar and wind power installations. A lot of them. In coal country.

Coal industry employment has been on a steady decline for nearly 100 years. The country is probably better off for it, but employment is growing in the alternative energy sector. Solar installers and wind turbine technicians are in growing demand. In fact, these two occupations lead the Bureau of Labor Statistics current employment outlook of high-demand jobs.

Pennsylvania is also investing heavily in wind power, and currently has more than 800 operational wind turbines. If built out to its fullest potential, Pennsylvania’s wind infrastructure could supply the state with about 6.5% of its total energy needs.

The evidence of growth in alternative energy didn’t stop in Pennsylvania. I also saw the First Solar production plant in Perrysburg, OH – just off the Ohio Turnpike. The plant, which was announced in 2018, is a $400M, 1M-sq. ft manufacturing facility for commercial-grade photovoltaic panels. It will employ about 500 engineers and manufacturing technicians with an average annual salary of about $60,000. First Solar doesn’t produce panels for residential installation. Instead, these panels are for large-scale and commercial energy production.

How does Michigan fare for solar and wind employment?

In Michigan, solar power production has grown by more than 600% since 2014. Michigan ranked 14th among all states for employment in the solar industry in 2013. In 2018, the Solar Foundation ranked Michigan 18th for employment. Both DTE and Consumers Energy have made major commitments to solar energy production.

Michigan’s solar employment grew by 1% and ranks third-from-last among the Great Lakes states for solar employment. It’s not because the demand isn’t here or the technology won’t work. Nor is it the cold, nor the latitude. It is the availability of trained workers.

Michigan currently has about 1,000 wind turbines that can produce about 2,000 MW of power. Wind turbines produced nearly 5% of Michigan’s power in 2016. The turbines produce most of their power during the fall, winter and spring months. The demand for wind energy is alive and well in Michigan, but the workforce is not.

I bring this up because the solar and wind industries desperately need trained workers. Programs that provide people with these skills are squarely within the wheelhouse of a community college. Unfortunately, our community college prefers to divert money that could be used to create these programs to build a hotel instead. Let me repeat this.

There are high-wage jobs waiting in an emerging industry, and the WCC administration’s response is to build a hotel.

Using the money that taxpayers provided for vocational and occupational education.

Published in Board of Trustees, Millage, News and WCC Conference Center and Hotel